In 2001, Our Lady Altar was replaced by the Blessed Sacrament Chapel. The Chapel was opened during the Holy Thursday service on 12 April 2001 by Father Michael Lynch.

The rock on which the Tabernacle stands is called the Galloway Stone. It came from Creetown, Wigtonshire which is only a few miles from Whithorn where Saint Ninian, the patron saint of the Diocese of Galloway, started his mission of spreading Christianity throughout Scotland. Saint Ninian is buried in Whithorn.

The Tabernacle is modelled on the lantern on the Church tower while the gates are in the same style as the railings on the boundary wall in front of the Church.

Between May and July 2007, the Blessed Sacrament Chapel was refurbished. An illuminated mural, depicting the Last Supper, was installed on the back wall by Gail Muir of the Lighthouse Glass Company, Irvine. It was modelled on the Tabernacle Doors that were part of the main Altar between 1979 and the mid 1990s. A light was fitted inside that Tabernacle and two windows were made transparent. Holders for books were installed on the railings, the back wall was painted and a carpet was laid.

At the right of the picture is a framed document titled The Galloway Stone. It text is reproduced below. 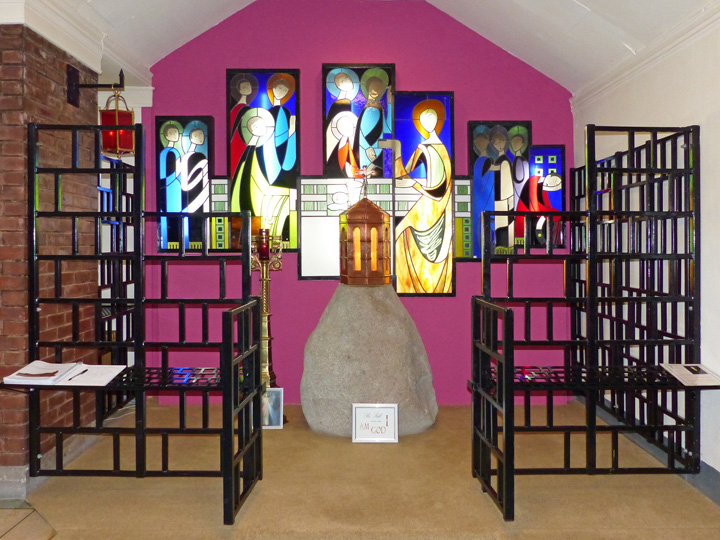 I was born in the fiery heat of planet earth
part of God’s creative touch when time begun.
He raised me up to see the light of day within the sound of sea
ten million years ago before the song of man was sung.
I served him well, across arch of time.
On Creetown’s shoulders slept
until to bring Christ’s news upon my head
Saint Ninian’s feet did step.

Upon this Altar throne
proudly bearing on my shoulders
the God who made me.

In cloistered silence I now stand and guard
God given stone within the sound of sea
until the end of time.