Fundraising is a fundamental activity in any Church and is usually targetted at building projects and maintenance.

Although the Pavilion and its grounds were bought on 30 January 1924, no building of the new church was done until 1936. During the intervening years, a great deal of fundraising took place. A committee was established under the presidency of Mr T McLaughlin.
An early driving force in raising money was Father Stephen Thornton (1871-1936) of the Church of Our Lady, Star of the Sea, Saltcoats. He organised ‘Go As You Please’ concerts in the Assembly Hall, Bute Place, Ardrossan on Sunday evenings. When visiting homes, Father Thornton would cajole an unsuspecting person into performing at a forthcoming concert. Talent was not an essential requirement. Once news spread that a particular person was ‘doing a turn’, large audiences turned up to watch the performance. Silver collections were taken at the concerts.

On 28 October 1933, a social function to raise funds was held in the Beach Pavilion, Saltcoats. A large audience attended and the event was very successful. Artistes gave of their time and talents free of charge to augment the building fund. A report was printed in the Ardrossan and Saltcoats Herald of 3 November 1933 as shown below.

People were encouraged to ‘Buy A Brick’ for the Building Fund. Whist Drives were held in the Masonic Hall, Saltcoats and Half Crown Cruises with dancing departed from Ardrossan Harbour for Rothesay via the Kyles of Bute. These events contributed to the funds needed to build the new Church of Saint Peter in Chains.

Benefactors later donated furnishings including the main altar, main crucifix, tabernacle, candlesticks, Stations of the Cross, the paschal candle holder and the sanctuary lamps. The sanctuary lamps were replaced by a single lamp in the Blessed Sacrament Chapel on 14 December 2001.

Other major fundraising targets were for the Presbytery in the mid 1950s and the Parish Centre in the mid 1990s. A report on the former can be read on the Sales of Work page.

The following report is from The Ardrossan and Saltcoats Herald of 21 July 1933.

Gala in Pavilion Grounds, Ardrossan in Aid of Building Fund

On Saturday and Monday, a Gala was held in the grounds of The Pavilion, Ardrossan in aid of the new Roman Catholic Chapel in Ardrossan. The event, which was held under the auspices of the Ardrossan Church Building Fund Committee, was very successful, being well patronised on both days. There were a confectionery stall, fruit and vegetable stall, refreshments stall, lucky dip stall, cup reading and a treasure hunt managed by Mr Marroni. Sports were also held and altogether visitors were provided with plenty of entertainment as well as business. Rev. Joseph Doherty of St. Mary’s performed the opening ceremony. The convenor was Mr Monan and the event was organised by Mr Thos. McLaughlin and his Committee. The organisers are to be congratulated on the success, financial and otherwise of the Gala. The Committee are grateful to those who patronised the event and also those who gave donations and lent flags, etc.

The following report is from The Ardrossan and Saltcoats Herald of 3 November 1933.

Social in Aid of Fund for Building in Ardrossan

A most enjoyable evening was spent by those who attended the social in the Pavilion, Saltcoats last Friday evening. Organised by the committee in charge of raising funds for the new Catholic Church in Ardrossan, it proved a great attraction. Reverend Father Joseph Doherty was accompanied on the platform by Reverend Fathers T Kelly and M Doherty, ex-Provost George McKellar OBE, Mrs Brown, Mrs Rice and Messrs T McLaughlin, T McCann and P Brusnahan. Apologies for absence were received from Bailie McCabe and Mr D Scullion. 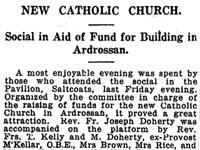 After a splendid tea, the audience was entertained to a very enjoyable programme of songs, dances and farcical interludes by the Variety Sparks from Glasgow under the leadership of Mr Gerard McCulloch and including Dot Metcaffe, Nan Wilbur, James Dowds, Harry Montgomery, Bill Curtis and Dan O’Brien, violinist.

At an interval during the proceedings, Reverend Father J Doherty thanked the large audience for their attendance which, he said, was surely a tribute to the worthiness of the object in view – augmenting of the building fund. The present dilapidated state of the Pavilion, Ardrossan made it all the more necessary that the greatest endeavour should be used to obliterate that landmark and raise an object of admiration and grandeur. Already, after a very short spell of endeavour by the committee and the enthusiastic support of the parishioners and friends, he had been handed a sum of over £120 which he considered remarkably good during such economic stringency as at present prevailed. It was unfortunate that the gift scheme had had to be cancelled but the absence of a demand for a return of donations to the scheme revealed the general willingness to help in the erection of a new church. When the required sum to commence operations was in hand, he was sure the Archdiocesan authorities would not delay but this meant the continued and generous response of the congregation.

Father Doherty also expressed the hope that all present would enjoy the evening’s entertainment. Mr T McLaughlin, president of the committee, moved a vote of thanks to Father Doherty and ex-Provost McKellar for their presence. Ex-Provost McKellar assured those in the hall of his delight in accepting the invitation given to him to be present. Father Kelly thanked the Saltcoats “Wellwishers” Association for allowing their flags and bunting to decorate the hall on the occasion of this social. He also expressed cordial thanks to the artistes for the delightful programme. They had come from Glasgow and had provided the fun without fee or remuneration. After thanking Fathers Kelly and Doherty for their presence, Mr T McCann thanked Mrs Murray, Saltcoats for her kindness in looking after the comforts of the artistes during their stay in the district.

A very successful dance followed the social function when the music was provided gratuitously by Gerard McCulloch and his Syncopaters from Glasgow and William Shanks and his band from Ardrossan. 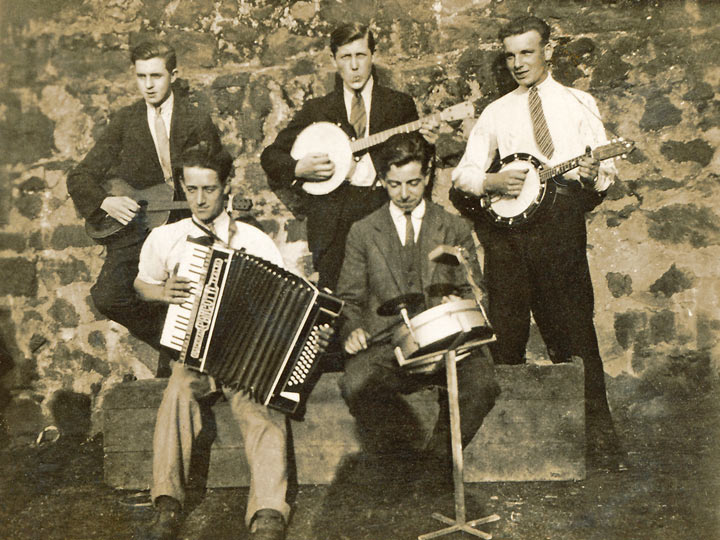 Willie Shanks (1910-1987) is the accordianist at the front left. The drummer at the front right is Robert Byers (1912-1997). If you can identify the other members of the band, please contact ardrossan@gallowaydiocese.org.uk